How to select the best lubricant to your vessel

Petroleum based (mineral) oils have been around for over a ‘hundred years’ and the performance (and limitations) of them is well known. Although previously used for ‘special’ applications, when synthetic lubricants became more generally available for the mass market in the 1960’s, they were more expensive, but ‘sold’ as higher performance and longer life lubricants than mineral oils. Now, with the advent of environmental requirements for (non-engine) lubricants for the prevention of pollution from vessels, the selection process for lubricants is even more confusing and difficult.

The base oils of lubricants that are generally accepted as being environmentally ‘friendly’ - or Environmentally Acceptable Lubricants’ (EALs) are:

With critical pieces of vessels’ propulsion, steering and stability equipment relying on the performance of EALs, to sail to US waters and in the future to the more dangerous Polar Regions, the right selection of lubricant is essential. There are a bewildering number of EAL offerings claiming environmental benefits,
better performance, long life, and sold at a ‘more competitive’ price, just exactly are you getting for your money? So, how does one decide which base oil type to select? – and then, which supplier of that base oil type lubricant does one choose, if there are more than one supplier?

Firstly, if we take the environmental properties of the different EALs, as a ‘given’ and out of the equation, this simplifies the decision making process. Whilst there are different lengths of time for biodegradation of these lubricants to take place (minimum limit is 60% biodegrading in 28 days, but some are more ‘friendly’ and degrade more than 70% in that time) and some EALs are heavier than fresh water and seawater and therefore sink, out of view – not so friendly. Those lubricants passing the specified biodegradation time, that exhibit minimal toxicity to marine life and do not accumulate in the organs of marine life to be ingested, up the food chain, can go forward to the next round of the selection process. Secondly (this is the hard one to pass) - it is the performance of the lubricant. What do you need to look for in the lubricant(s) you are choosing? If we use the analogy of Formula 1 Racing …. the success of the car is primarily derived through the chassis, the engine/gearbox and through-race reliability; not to forget, driver input.

The base oil is the chassis, with inherent stability. Properties of the chassis of the oil include: viscosity stability (generally the most important property of the oil); anti-ageing; low temperature flow; corrosion protection; compatibility with materials in contact with the oil; effect of any water ingress (hydrolysis and demulsibility); density (some synthetics can weigh up to 25 per cent more than mineral oils so that extra weight needs to be catered for in stronger tanks/pipe supports) - and last, but by no means least, evaporation loss that means that some of your oil that you have paid for, evaporates into the atmosphere (potentially up to 18% weight loss with some mineral oils), so it is not ‘such a low a price’ for the fill! The lower evaporation loss of synthetic lubricants goes some way to off-setting their additional cost.

The engine/gearbox is the designed/engineered performance of the oil - the selection of additives to complement the base oil: to enhance viscosity, or to further depress pour point for operation at lower temperatures; to provide shear stability [shear stability of a lubricant is its resistance to change of its viscosity whilst being subjected to mechanical (shear) stress]; anti-wear and extreme-pressure additives; to modify the frictional properties for lower friction, or provide controlled friction for wet clutches. The base oil also needs to have good additive solubility, to keep the additives in suspension and not separate.

Reliability and long-life comes from the combined optimum high performance of the chassis and the engine/gearbox and is the sum of:
the stability of the base oil viscosity and shear – with no need for viscosity improvers that can be broken-down

The third and easiest decision is the COST of acquiring your lubricants – if, as stated before, your selection is based on lowest price, then there is the choice of the lower cost (lower performance) base oil ‘blends’. However, if you are looking at the ‘long-term game plan’, then this is where the through-life reliability of your oil gives you beneficial pay-back.

Marine propulsion systems Original Equipment Manufacturers (OEMs), Owners and Shipyards have been gathering information over the past few years about the performance issues surrounding the use of EALs. Many OEMs are still issuing letters of Technical Infeasibility, to allow continued use of mineral oils, whilst still gathering the information, but some are sufficiently advanced to be making decisions on (at least) which base oils are inherently suitable for use in the marine environment in their equipment. Issues, such as…

…have become evident with some types of EALs. All these problems cause more frequent system/lubricant monitoring, lubricant topup, maintenance, system draining, re-filling and transport/disposal of used oil. These are the obvious direct costs of using inferior performing/life oils – not to mention the hidden costs of the paperwork to administer all these monitoring/inspection/testing/reordering/logistics operations, and lost revenue due to equipment downtime/failure.

Currently, fully Saturated Synthetic Esters are in ‘pole position’, leading the way in high performance and long-life marine lubricants; with the added benefit of being environmentally considerate and reducing your Carbon Footprint coming ‘Free of Charge’ (almost - OK, the minimally toxic performance additives come at a higher price than those used in toxic mineral oils). Documented monitoring of ‘real-life’ use of Saturated Synthetic Esters shows that in all areas of fluids/lubricants use: mainly hydraulics and gearboxes, up to 10 times the life of mineral oils can be achieved.

It is the lubricant manufacturer’s job to tell you all about the key performance indicators of their lubricant(s) – consult them. PANOLIN, Switzerland, make fully Saturated Synthetic Ester (HEES) lubricants, all US EPA VGP compliant, for all vessel application lubrication requirements, with availability around the world.

Image 1: Viscosity out of control – increasing viscosity of lubricants with poor thermal and oxidation stability
Image 2: PATRIOT ocean-going escort assist, fire-fighting tug in the US that utilises PANOLIN lubes in their high power towing and escort winches, that require high – and consistent – performance: Courtesy of Marine Towing of Tampa 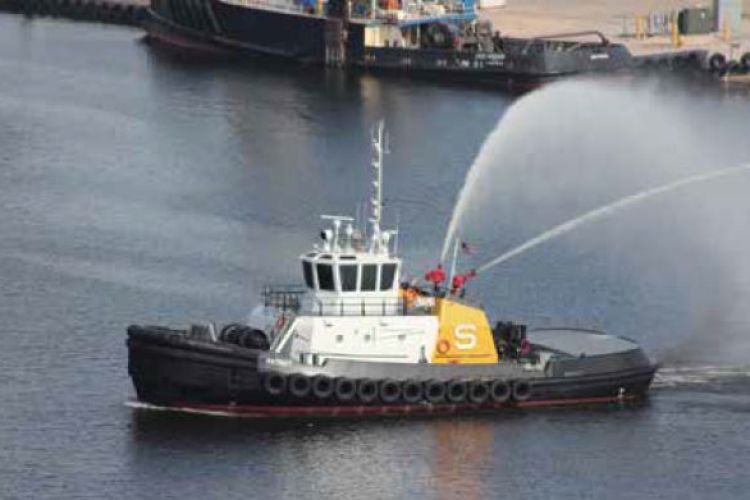